I grew up in the space age. Launch days were a big deal. 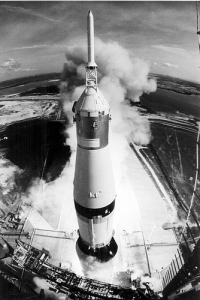 I’d sit in front of the TV, one eye on the countdown clock, watching Walter Cronkite fill in the technical details and mission specifics. The impossibly white rocket stood poised in the background, on the pad, in the Florida sunshine. Pure potential. Little wisps of steam escaping from hoses connecting it to the massive gantry.

Remarkably, birds still flew around the rocket and went about their business on the Cape. Had they no idea what was going to happen?

The hours and then the minutes and finally the seconds (T-minus 10 seconds and counting…) ticked down.

At zero, mine and everyone’s adrenaline on full, a massive cough of smoke and fire burst from the Saturn V and enveloped it. For a few breathless fractions of a second – far too long – nothing seemed to happen. The rocket just sat there in a boiling cloud of smoke.

And then, impossibly slowly, it started to pull away from the earth and at once you could see, fire through the smoke, the sheer ferocity of the energy this massive vehicle was using – just to get off the ground. To overcome gravity, inertia.

It was awe inspiring. For those first few seconds, the big struggle – earth against rocket, inertia against movement, nature against technology – was on. Really on. Everything hung in the balance.

And then the rocket cleared the tower picking up speed and we cheered and whooped and it was up and before long out of sight – a bright dot, tracked by shaky earthbound cameras.

Myles to Go is on the pad. Birds are going about their business unawares. A lot of work is going on in the background. And we’ve trial launched before – made some changes and we’re back.